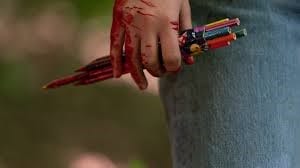 Everyone who’s into movies has a thing. A thing that is endlessly fascinating and that can be refracted through a thousand different lenses. One friend of mine has a deep and abiding love of schlocky horror movies. Loves ‘em, can’t get enough of ‘em. They’re his happy place, and whenever he’s having a tough day, a small scotch and a viewing of Motel Hell will perk him right up.

My thing is comedians playing villains. However, let me be clear. If a comedian or comedic actor is playing a comedic villain, that doesn’t scratch the itch. Instead, when a funnyman plays a real nasty piece of work, my movie sense starts tingling. James Belushi, a guy not exactly known for having a wide range, is highly entertaining as a murderous redneck in Retroactive. Michael Keaton, who made his bones as a skilled comic actor, did excellent work as a conniving tenant from Hell in Pacific Heights and as a vicious convict in Desperate Measures.

For me, the apex of this can only be Robin Williams. A look at his filmography shows many, many roles where he played a benevolent motormouth. That’s true, yet despite having won an Academy Award, I don’t think Williams has ever been properly appreciated as either a skilled dramatic actor or as an effective villain. In Insomnia, he does subtle work as a fledgling serial killer bedeviling Al Pacino. His performance in One Hour Photo as an obsessive photo technician is simultaneously creepy and tragic.

Williams casts a long shadow as a comedian, a philanthropist, a dramatist, and a scary as hell bad guy. He gave others the courage to light their cinematic image on fire, and I rejoice when I see actors take a crack at this sort of thing. Genial funnyman and FOS* Kevin James has stepped up to the plate to play a villainous creep in Becky, and while it doesn’t always work, I admire his taking a chance. 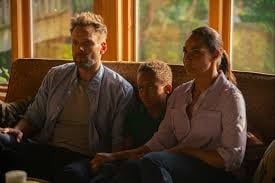 Thirteen is a tough age for anyone. For Becky (Lulu Wilson), it’s even tougher than normal. She’s getting bullied at school. She has a habit of shoplifting. Her mother has been dead for over a year. Her father Jeff (Joel McHale) has been dating, and as you can imagine, Becky isn’t super thrilled by that. The one aspect of stability in her life is her two dogs, the sweet Dora and the protective Diego. Everything else seems to be in a state of flux.

Jeff loves Becky and wants to do right by her, but he thinks it’s time for the family to move forward. After pulling her out of school early, he drives her to the family’s lake house. His girlfriend Kayla (Amanda Brugel) is waiting for them, along with her young son, Ty (Isaiah Rockcliffe). During dinner, the truth comes out — Jeff has asked Kayla to marry him.

To put it lightly, this news does not go over well with Becky. She storms out of the house and, followed by Diego, she sequesters herself in a secluded clubhouse. As temper tantrums go, her timing couldn’t be better. That’s because she’s not home to be introduced to Dominick (Kevin James). He tells Jeff and Kayla his dog has gone missing. He’s lying. 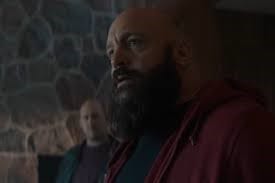 It turns out that Dominick is both a neo-Nazi and an escaped convict, which is not an ideal combination. He’s joined by the conflicted Apex (Robert Maillet), the mouthy Cole (Ryan McDonald), and the personality-free Hammond (James McDougall). They’re looking for a key hidden somewhere on the property. They’re willing to get very rough. The only one who can stop them is an extremely resourceful and extremely angry girl.

Much like the title character, Becky is short, inventive, and incredibly mean. Directors Jonathan Milott and Cary Murnion are laser-focused on delivering a home invasion thriller that features jaw-dropping gore.** It kind of works. The upside to the film is that there are some inventive and wildly violent set pieces. Once we’re settled in at the lake house, the pacing is quick and efficient. If you’re in the market for a movie in which a tween absolutely annihilates a bunch of white supremacists, you’ll find that here. The bad news is that Milott and Murnion don’t do a great job of establishing the geography of the house and the surrounding property. How big is the house itself? Where is the treehouse in relation to the patio and Becky’s treehouse? There are multiple scenes of people hauling ass through the woods, yet I never had any idea where characters were in relation to each other.

The screenplay, by Lane Skye, Ruckus Skye, and Nick Morris, additionally has its ups and downs. At times it feels a little like an edgelord version of Home Alone, and the characterization of Becky herself is a little iffy. I get that she’s going through a difficult time, but when she cuts through the neo-Nazis like Junior Jason Vorhees and we’re told it’s due to her anger, it seems like the script is saying that Becky is ultimately a psychopath. Is she? Was she always this way and this just gave her a chance to blossom? Having said that, a lesser screenplay would have wasted precious real estate in showing us in exacting detail what Dominick’s precious key is actually for. The Skyes and Morris know that it doesn’t really matter whether the key unlocks a vault or the Ark of the Covenant, only that it’s important to Dominick. I liked that. 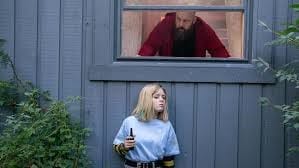 By and large, the cast is pretty good. As Becky, Lulu Wilson doesn’t have a ton to work with, but she sells the seething anger of her character. Wilson has these wide, expressive eyes, and she’s able to shift them from curiosity to fear to rage. It’s an impressive performance from such a young actor. Overall, I liked Kevin James as Dominick. He knows that to be an effective villain, stillness and quiet can be more effective than ranting. When his character is behaving in a normal and reasonable way, James comes off as creepy. We’re told that, over time, his character has taken a number of people under his wing. However, Dominick never quite feels like he has the cult leader charisma of a Charles Manson. In the end, he’s just a guy with a bunch of Nazi tattoos.

To me, the real standout performance is an understated one, and it’s by Robert Maillet as the henchman Apex. Early on, his character commits an appalling act. We can see the guilt from that weighing on him, and we can see his fear that he’s in over his head and unable to prevent another atrocity from taking place. Maillet is a big guy, and he uses his size and body language in an interesting way. He almost seems to shrink from the clearly smaller Dominick, and he never makes eye contact for long with the hostages in the house. I appreciated the nuance that he brought to what could have been a thankless role.

It never would have occurred to me to make a tweenage Die Hard where the heavy is the guy from The King of Queens, and be expected to take it all seriously. At the end of the day, Becky is a pretty good revenge thriller, and I’m pleased that everyone involved was committed to bringing this little film to bloodthirsty life.

**Fair warning, if you like eye trauma, you’ll adore this movie.

Tim Brennan
Tim has been alarmingly enthusiastic about movies ever since childhood. He grew up in Boulder and, foolishly, left Colorado to study Communications in Washington State. Making matters worse, he moved to Connecticut after meeting his too-good-for-him wife. Drawn by the Rockies and a mild climate, he triumphantly returned and settled down back in Boulder County. He's written numerous screenplays, loves hiking, and embarrassed himself in front of Samuel L. Jackson. True story.
Tagged: BeckyMovie ReviewTim Brennan
OnColoradoSprings.com is a locally-owned and operated directory and information guide for Colorado Springs Colorado
Discover the best of Colorado Springs shopping, restaurants, night life, breweries, events, business, outdoors, fun, local life, real estate, transportation, jobs, and schools.
Looking for what to do in Colorado Springs? OnColoradoSprings.com has columnists, and bloggers to keep you up to date on the best of Colorado Springs, Colorado.