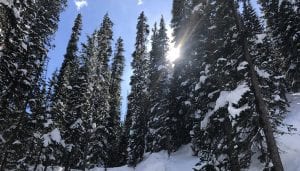 If you grew up in the 90’s and have never played out even a single moment of your life to Eminem’s “Lose Yourself” lyrics, I’m going to question the inner workings of your childhood. It was (or is) a rite of passage, and aside from starring in every one of my basketball warm-up mix tapes from the year it was released in 2002 until I graduated college in 2006, I can still hear the words playing in my ears through a variety of noteworthy life experiences.

Spoiler alert. I’m from Basalt, Colorado. Not to be confused with 8 Mile.

But, here, while cruising up Kensho chair in Breckenridge at the ripe age of 34–well beyond my years of basketball warm-up mix tapes–I am having yet another one of those moments.

Spoiler alert number two. My hands are in mittens and it’s nine degrees outside, so they’re not actually sweating. And my knees are, in fact, weak and my arms are, in fact, heavy because I just caught my toe edge and face-planted off the cornice I was attempting to send on my snowboard before sliding down the Serenity Bowl, head first, for about 30 feet.

Regardless of these aforementioned circumstances, the song is playing in my head as I meet up with my boyfriend at the base of Peak 6, we hop on the chairlift that so graciously initiated our union, and he immediately blurts out, “Okay, something’s on your mind. You seem off. Tell me why you’re upset.”

Two things. One. Damn him for knowing me like that (but actually, no, thank gawd he knows me like that). Two. This guy isn’t afraid to ask. Without sugarcoating.

Because my feelings have been hurt. It’s been almost two months since we met–without so much as a hiccup–and my feelings finally got hurt (because, no single human can satisfy all of our rational and ridiculous needs, so yes, inevitable).

The reason. He took 24 hours to text me back (gasp), and it hurt my feelings.

He went snowboarding with one of his friends (that’s moving soon) on a mountain where I’ve never been (that gets hardly any service), and self-admittedly, he despises checking in (I get it, my independent counterpart).

It’s worth repeating that my love languages are words and touch. So, I need them. And I don’t mean that with some whiny air of pathetic-ness (for some reason, we have convinced ourselves that expressing our needs is often interpreted as being weak). No, I need words and I need touch, and I’m not afraid to shout it from every rooftop (or mountain peak).

I also know that I want a life that is completely intertwined with my partner. I can’t compartmentalize certain areas of my being in hopes of closing him off to keep something sacred for myself (at least, I don’t have any desire to operate like this because been there, done that, bought the t-shirt, and burned it). I believe in having separate passions, which will therefore shape our separate identities, but my dream partnership calls for a sharing of these passions that culminates in the truest and raw definition of interdependence. I want to be strong enough to stand alone, but soft enough to admit that I don’t want to (because: I don’t want to).

It is my belief that by holding parts of ourselves hostage we are really closing ourselves off to our ability to exist inside unencumbered vulnerability. So, it is my desire to do life alongside someone who shares a similar sentiment.

In the couple days leading up to this full day of no contact, I had interpreted some of his actions as compartmentalization, which translated into me assuming that I wasn’t a priority (hashtag human), which then magnified the 24 hours of silence.

Fact. Even when you land the guy, you’re still playing a game. Only, the opponent is now yourself (insert face palm emoji).

So yes, I copped a quasi-attitude. And, based on his reaction, you see that this is obviously not my normal mode of operation. The irony here lies in my inner-dialogue as I rationalized that he was going to be completely caught off guard that I was upset, yet I was also aware that I had to be present with my emotions in order to theorize a solution to the problem so that he would feel respected and I would feel important.

All this. Over one little text message.

Months ago, I wrote a blog about a couple that I had witnessed completely annihilate each other with their words–in public–during one of my typical Whole Foods excursions (you can read it here). Every single statement made by the husband and wife duo triggered a defensive and argumentative response. I watched the children somberly, seemingly too young to understand what was happening, as they ate their organic fruits and vegetables and climbed atop the grocery cart as if it were some type of five-star jungle gym. The couple’s eyes were glazed over with exhaustion and desperation and pain – merely going through the motions with their tiny humans – a state that I assumed they had lived in for quite some time. Because I knew that their anger didn’t start there on that day at that Whole Foods. No, it had started so very long ago. Much closer to the beginning.

Like here. It had started here. On the Kensho chairlift that sits calmly inside the tree line until it reaches approximately 12,000 feet and becomes fully exposed to the harsh winds that often whip through Peak 6 summit. Camo pants and I, we are laying the foundation for five days or five months or five years from now. How I articulate my hurt feelings. How he responds to those words. How we communicate through the shit.

So yes, the little text message (or lack thereof) is the subject, but what is happening beneath this layer is the real work. Because there is no right or wrong. There is only communication and choice: compromise or acceptance.

So, now I know that his friend is moving soon, and he didn’t have service all day, and that his biggest pet peeve is being asked to check in. He showed up to the conversation, not to justify his behavior, but to communicate with me about my feelings and to articulate his own. And I showed up to the conversation to explain being “off” and to articulate my needs. 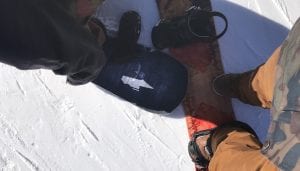 And we made it out. Alive. Together.

Because him. He heard me. He really heard me. In that moment, he made a choice to apologize inside a space where he didn’t do anything wrong. He used his voice to show me that he cared and to make me aware of his being. He didn’t bow out. He chose me.

And me. I heard him. I really heard him. In that moment, I made a choice that a text message at 8:32am on a Wednesday morning means far less to me than the way he holds me every single night or the way he makes me laugh uncontrollably before we fall asleep or the giddy feeling that jumps from my stomach to my heart when he opens the Airstream door. I used my voice to show him that I cared and to make him aware of my being. I didn’t bow out. I chose him.

This begins the building. This moment is layer one of a thousand little layers that will eventually and simultaneously exist as both our past and our present (no matter how far we make it into the future).

Because every day, you are creating your forever with the people around you.

And I refuse the public spectacle. I denounce the verbal annihilation. I choose the work. And, I’m not settling for someone who doesn’t hold fast to the same standards.

Stephanie Kemp
Stephanie is a road warrior, adventure seeker, and brand builder. She grew up in the mountains of Colorado and after spending nearly a decade between the PNW and the east coast, she’s proud to once again be calling Colorado home. Well, home for now. Stephanie recently bought an Airstream with the intention of living a more minimalistic and nomadic lifestyle. After logging over 20k miles in her car last year, chasing rock faces in the summer and powder days in the winter, she realized that life could be a hell of a lot simpler if she could carry her house with her on these adventures. In 2017, she started her own marketing agency, Sleigh Creative, to take control of her freedom. As a freelance creative director and brand strategist, she spends a lot of days playing and even more nights working. In all things, be it work or play, she seeks to inspire people to the life of never settling. You can follow along with her journey on Instagram, @by.stephanieleigh, and through her self-titled personal blog.
Tagged: AirstreamEminemfoundationrelationshipssnowboardingWhole Foods
OnColoradoSprings.com is a locally-owned and operated directory and information guide for Colorado Springs Colorado
Discover the best of Colorado Springs shopping, restaurants, night life, breweries, events, business, outdoors, fun, local life, real estate, transportation, jobs, and schools.
Looking for what to do in Colorado Springs? OnColoradoSprings.com has columnists, and bloggers to keep you up to date on the best of Colorado Springs, Colorado.