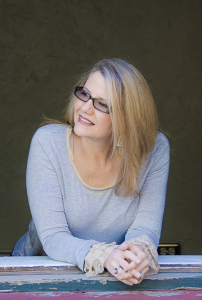 Laurel Justice is a Colorado Springs artist who paints abstracts and landscapes through the medium of soft pastels. She holds an MA in counseling and often pairs therapy with artistic expression to create spaces of healing for her clients.

In 1996, just months before the US Summer Olympics, Laurel Justice moved from Atlanta, GA to Colorado Springs. At the time, the local arts scene was in a slump and Justice found it difficult to connect and identify with the city as an artist.

“It was a wasteland,” Justice tells me before laughing to herself. “Ok, maybe that’s a little harsh, but I would hop on a plane and go to New York or San Francisco just to get my fix… If I wanted to see really good theater I was driving to Denver for it. Or live music.”

Justice and I meet at a hip coffee joint in downtown Colorado Springs. We chat over flavorful and ethically produced coffee. The garage door that makes up the shop’s southern wall is open to a breezy, sunny day. Justice looks the part of the grounded artist, too. She sports tortoiseshell glasses; a tasteful scarf; and geometric, gold bangles that highlight a black fitbit snug around her wrist. Sitting here, I would never doubt that Colorado Springs was anything but an up-and-coming arts destination. 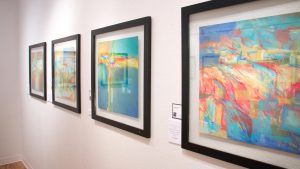 I begin the interview by asking about a line from her studio artist bio that reads, “She creates a sense of belonging to a larger story through her work.” I’m a creative writer. I love story. I just have to ask.

“I’m a huge fan of other people’s stories,” Justice says, “and I’m a huge fan of other people understanding their stories and being informed of how their stories are shaping them. In the therapy office, I’m constantly reflecting back to people meaning, helping them to not just see the events but the meaning of the events. I get to theorize with them and they get to decide what the meaning is. I feel the same way about art. If it helps them expand their thinking about why they’re here and what their relationship is to the rest of humanity or do they matter – if it can connect people to that soul part of themselves – then I feel great about how I’m showing up in the world.”

This philosophy is expressed in her paintings. The day after our interview, Justice hosts an art show titled, “Words of a 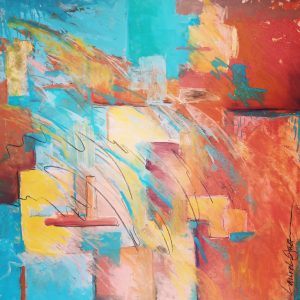 Feather: Paintings inspired by Emily Dickinson and Other Word Bosses.” The paintings alone are stunning. Walking through the gallery, I’m struck by the vibrancy of colors; and I’m moved by the way sharp geometric shapes and jagged strokes contrast with the inherent softness of pastel as a medium. But my experience is further enriched as I relate the visual art to the accompanying quotations. Emily Dickinson. Frida Kahlo. C.S. Lewis. I’m not told what to think, but I’m invited to enter into an intertextual, aesthetic conversation. In other words, the larger story.

And of course, Justice has been a key player in developing the Colorado Springs art scene “story.” Quite a bit has changed since 1996. After joining her current studio, Second Floor Studios, Justice says she’s experienced true community. “We care about each other and do life together. We watch each other’s kids grow up.”

I smile, happy to see that a field often soured by competition and elitism has retained its heart. So for my final question, I ask Justice to comment on the continuities that have helped Colorado Springs maintain its identity over the years.

“What was true then and is still true now is that anybody can show up and make a difference, anybody can bring a dream to Colorado Springs and make it happen whereas a lot of big cities are the land of broken dreams where people couldn’t compete because there were so many other people with that same dream.”

Then she points to the coffee bar behind us. “This coffee shop that we’re sitting in is the dream of five young baristas… and that’s the kind of town this is. You can dream that stuff and make it happen.” 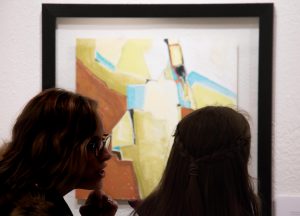 If you’d like to attend an art show by Laurel Justice or other Colorado Springs artists, put First Friday’sDowntown on your calendar. From 5-8pm on the first Friday of every month, take a walking tour of featured Downtown galleries and studios or explore on your own by hopping on the free shuttle. For more information, visit https://downtowncs.com/event/firstfriday/

If you know a local artist who should be featured, email me at thomasjneathery@gmail.com

TJ Neathery
TJ Neathery spent his childhood in Albania, adolescence in Texas, but now lives and writes in Colorado Springs, CO. He describes himself first and foremost as a Christian who is a writer. He received his MFA in fiction from Oregon State and enjoys writing short stories and novels. Recently, he completed his first novel manuscript, Gracie Got Us Down to Texas, about an alt. rock band trying to break onto the Austin, TX music scene. He has also published stories in various lit mags. One of his great passions is music. Since high school he's collected over 350 CDs and he enjoys playing his vinyl collection on a hot pink Victrola. With all these artistic interests, it just makes sense that he connects with local artists through the Artist of the Week feature.
Tagged: colorado springsfirst fridaylaurel justicelocal artists
OnColoradoSprings.com is a locally-owned and operated directory and information guide for Colorado Springs Colorado
Discover the best of Colorado Springs shopping, restaurants, night life, breweries, events, business, outdoors, fun, local life, real estate, transportation, jobs, and schools.
Looking for what to do in Colorado Springs? OnColoradoSprings.com has columnists, and bloggers to keep you up to date on the best of Colorado Springs, Colorado.