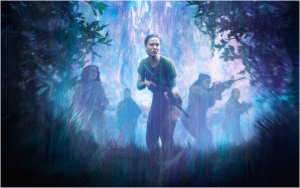 How do you solve a problem like Annihilation? Don’t get me wrong, it’s a very good and very challenging film, and one that everyone should see as quickly as possible. Before we get into the specifics, let’s talk about the tragedy of its release, and why it bodes ill for intelligent art.

Paramount Pictures ponied up $55 million to adapt the first book in Jeff VanderMeer’s Southern Reach trilogy. Alex Garland, the director of the superb Ex Machina, was hired to write the screenplay and direct. An impressive team of actors was hired. Things were a go. Upon the film’s completion, as always happens, a test screening took place. Things didn’t go well, and the audience received it poorly. That’s not because they had a cinematic war crime like Fifty Shades Freed inflicted upon them. Paramount had a much bigger problem.

Instead of a turkey, Alex Garland did something far worse. He brought them a work of art. Cerebral and uncompromising art, for God’s sake! How are you supposed to put that on a Burger King glass? How’s it going to play at a mall theater in Abilene, Texas? Paramount already got burned by art once with the failure of Mother! last year. David Ellison, a financier connected to Paramount, worried the film was “too intellectual” and “too complicated.” He demanded changes to make it more palatable to the average moviegoer. 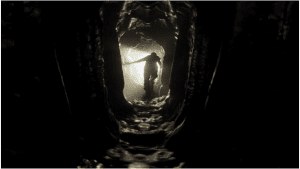 Alex Garland thought the film was fine as it was, and producer Scott Rudin agreed with him. Since Rudin ultimately had final cut, no changes were made. Paramount quickly showed their utter lack of faith in Annihilation by cutting a deal with streaming service Netflix. Paramount would theatrically release the film in the United States and China. 17 days later, Netflix would begin streaming it everywhere else. This not only undercuts the film’s potential earnings, but it’s also an open acknowledgement that Paramount has no faith in the material. That’s a mistake, and while the film certainly has its problems, it deserves to be seen on the big screen.

A meteor slams into a Florida lighthouse. From there, we’re jarringly introduced to Lena (Natalie Portman), a cellular biologist with years spent in the Army. She’s dazed, and sitting upon a folding chair in a glass enclosure. A man in a hazmat suit stands in front of her. This is Lomax (Benedict Wong), and he’s got a very simple question for her. What happened?

To answer that, we need to flash back. Lena’s husband Kane (Oscar Isaac) is a Special Forces operative, and he’s been missing for a year. Not unreasonably, she assumes he’s dead. Turns out he’s not, because he strolls right into the house while she’s painting. But Kane is a shell of his old self and he soon lapses into a coma. 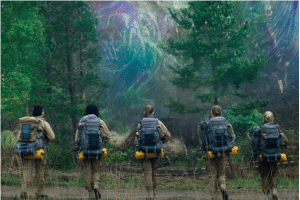 Along with her hubby, Lena is brought to a research facility commanded by a shadowy organization known as the Southern Reach.* The area is close by the lighthouse, but there’s a slight problem. What looks an awful lot like a rainbow wall has appeared, and over the last three years, it’s slowly and inexorably expanding. This is The Shimmer, and whatever goes in, doesn’t come out. Radio signals have vanished, footage from drones has been unusable, and military teams simply don’t return.

Only Kane returned, and now he’s dying. Psychologist Ventress (Jennifer Jason Leigh) is assembling an expeditionary team consisting of the compassionate physicist Radek (Tessa Thompson), tough-as-nails paramedic Thorensen (Gina Rodriguez), and the kindly anthropologist Sheppard (Tuva Novotny). The plan is to make their way to the lighthouse and discover the cause of the phenomenon. Lena demands a spot on the team, and soon the five women enter The Shimmer. Then, things get weird.

Take a look at the movie poster for Annihilation or give the trailer a watch. You’ll see Natalie Portman toting an M4A1 rifle looking tough as hell, and you might assume you’re in for running,  shooting, screaming, and grisly deaths. There is that, but this isn’t an action movie wearing sci-fi clothes. This is hard science fiction asking lots of questions, and it’s not terribly interested in providing easy answers.

How fortunate we are to be getting consistent work from Alex Garland! After Ex Machina, this is only his second film, and he’s already a filmmaker of considerable power. His control of tone is impressive, and the film begins with a quiet sense of unease and gradually ramps things up. There’s a clever balancing act at work here between the increasing surreality of the world and the down to earth performances. Garland keeps us constantly on edge, and a nighttime attack in a house in particular is absolutely alarming. His imagery and use of color is complemented nicely by an unnerving score from Geoff Barrow and Ben Salisbury.**

Garland wrote the screenplays for 28 Days Later, Dredd, and Sunshine. His script here is solid, though the story and themes here don’t complement themselves as elegantly as Ex Machina. While the film is about biology, self-destruction, and how change eclipses morality, things still occasionally feel clunky. Flashbacks inside of flashbacks don’t really help, and this being a “people on a mission” film, the journey is inherently a lot more interesting than the final destination. Still, I admire the willingness of Garland to ask difficult questions and provide no answers.

His cast meshes together beautifully. Jennifer Jason Leigh automatically improves a film simply by being in it, and I 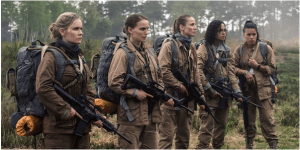 enjoyed her icy and no-nonsense Ventress. Natalie Portman could play a role like Lena in her sleep, a competent and smart professional. It’s fun to watch her play a smart character trying to work out a problem, and you can see the gears turning in her head. In a lesser movie, Gina Rodriguez’s Thorensen would be the stereotypical badass Latina. There’s aspects of that, but her character is so well-rounded, friendly, paranoid and resolute, that she quickly became the standout of the film for me.

Having said all of that, I don’t think Annihilation quite works. There’s an important distinction that needs to be made, and I think the problem here is me and not the film. That’s the nature of art. Sometimes we dial into it immediately, sometimes we don’t quite click with it, and sometimes we have to reexamine it with a fresh perspective. I promise you, though, that someone will see this film, it’ll burrow its way into their brain, and their synapses will absolutely light up. It might inspire them to make their own art, or even inspire them to view the world in a different way. In my book, that makes Annihilation an unqualified success.

**For your enjoyment, you can find a 10-hour loop of the weirdly droning musical theme by clicking here. You’re welcome.